The fields were ripe for the harvest in Cedar Falls, IA on the campus of the Iowa State Teacher’s College in the summer of 1941.  For some time, Lutherans at ISTC met on Sundays at the corner of College St. and Seerley Blvd. to be bused over to Waterloo to receive the gifts of Word and Sacrament at Immanuel Lutheran Church.  On this particular Sunday, sixty-six students happened to be waiting at the bus stop.

Much to the students’ dismay, the two buses that arrived to pick them up only held forty people, leaving twenty-six behind.  These twenty-six returned to their dorms with an empty stomach that Sunday, not receiving the Word and Sacrament they needed and desired.

The story could have ended there as just a side-note in the annals of the Iowa District East.  However, God is faithful and will make sure His sheep are fed.  The situation was brought up by a concerned pastor, the Reverend Oetting, who included it in his report to the Board of Directors of an Iowa District East meeting in July of 1941.  The men of the Board took immediate action and authorized an emergency provision enabling the district to begin work at ISTC.

This was not the first time the board had discussed work at ISTC. Months before, on October 22, 1940, the Board of Directors had formed a committee to investigate suitable sites in Cedar Falls for a chapel. Because of the story of the twenty-six students left at the bus stop, the Board was moved to begin the process as soon as possible. Backed by a grant of $25,000 from the National Lutheran Education Association, College Hill Lutheran Church and Student Center was born.

On September 12, 1941, the Board of Directors resolved to call a pastor and purchase a large home for $3,500 to serve as a residence, chapel, and student center. Interestingly, the home was once owned by the late Dr. D. Sands Wright, among the first instructors at ISTC.

By October 8, 1941, a call was extended to the Reverend Edgar Brammer of Gainesville, Florida.  He accepted and moved to Cedar Falls in January 1942.  On February 15, 1942, College Hill Lutheran Church and Student Center was dedicated and Reverend Brammer installed as its first pastor. 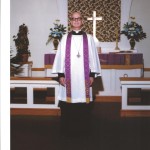 Therefore as you see, College Hill Lutheran Church and Student Center owes its founding to the grace of God, Who took twenty-six college students’ bane and created hundreds of future students’ blessings.

Forty LCMS students attending ISTC were part of the College Hill Lutheran Church student group the first year.  The group also later formed Gamma Delta.  In addition to the regular reception of the Word and Sacrament on Sundays, the students showed great enthusiasm in the opportunity to engage in loving service to their neighbors in the community.  One of the first projects young Pastor Brammer, the students, and the Walther League of Immanuel Lutheran Church, Waterloo, undertook was a canvass of the College Hill neighborhood to determine church membership in the community. On March 22, 1942, the volunteers interviewed each neighborhood home’s occupants and left announcements of Holy Week services. Brammer noted in a scrapbook:

Much helpful information was obtained, and interesting and worthwhile experiences were had by the students as well. At 5 o’clock we came together again at the chapel for a chili supper, after which we sorted cards and compiled the information from them.

Upon the completion of the neighborhood canvassing project, College Hill Lutheran Church adopted a constitution and was formally accepted into the Iowa District East and the Synod at the District Convention in Clinton, Iowa.

On July 19, 1944, the Board of Directors instructed the trustees of the Cedar Falls “Property”: President Hesse, Pastor J. Schliepsick, and Pastor George A. Koch consulted with the College Hill congregation and the officials of the National Lutheran Education Association to work on plans for a building in Cedar Falls. On May 16, 1945, the Board of Directors met with Louis Steinmeyer, a St. Louis architect, as he presented his plans for the new student chapel. Although the foundation was laid on paper, construction was slowed by wartime shortages of manpower and materials.

August of that year, the Iowa District East met in convention in Atkins, Iowa. Items on the agenda concerned additional funding of $50,000 for the mission at ISTC and the work at the campus church at The University of Iowa. Wartime demands had pushed prices upward, and what seemed like an adequate sum for College Hill in 1940, $25,000 was no longer adequate. On the night before this resolution was to come before the convention Japan surrendered, ending the war and making the monetary request much more manageable. The resolution to grant $50,000 for the work in Cedar Falls and Iowa City passed without dissent.

On January 28, 1946, additional property was acquired for $7,800 to house Pastor and Elsa Brammer when the Wright house was torn down to make room for the new building.  In the process of designing the church building, College Hill Lutheran Church more than doubled, and a second service was added.  When two services became inadequate, the congregation rented Gilchrist Chapel to hold services, Sunday school, and Bible classes.

The district finally approved the plans, and early in 1950 the property committee took bids. Even with the added funds granted in 1945, College Hill was still short $20,000 from the lowest bid made by Peterson Construction of Garnavillo. The congregation reached an agreement with the company that the district and the congregation were to make up the shortfall.  In the meantime, architect Steinmeyer’s health was failing, and he was unable to come to Cedar Falls to supervise the work, so David Toenjes of Waterloo, a local architect, was given the task. The Wright house was then torn down and work begun.

On Sunday, May 27, 1951, the dedication of the new church building was held at 3 p.m. After the Iowa District East had first begun to explore the possibility of starting a congregation in Cedar Falls eleven years ago, the district and College Hill Lutheran Church dedicated a new red brick Early American-style chapel and student center.  The service of dedication featured: Reverend W.D. Oetting of Waterloo, the President of Iowa District East and chairman of the building committee; special guest speaker Reverend Walter C. Birkner of Fort Wayne, Indiana, the chairman of the Student Services Committee of the Synod; A. L. Peterman, the congregational representative on the building committee; and the Reverend Edgar A. Brammer, the secretary of the committee and pastor of College Hill.  185 communicants and their friends and relatives gave thanks to God for their new building.

In all, the red brick, Indiana limestone, and slate grey asbestos shingles of College Hill Lutheran Church and Student Center cost $82,000.  The original building remained without additions for more than forty years.  In this new permanent church, the College Hill congregation grew from 221 baptized in 1951 to 366 in 1959. Since the sanctuary could only seat about 130, three services were added to accommodate parishioners. As the college’s enrollment continued to increase, so too did College Hill Lutheran Church.

Because the newly constructed building was becoming increasingly crowded, the congregation desired to purchase the adjacent property to expand the church. The district, however, had other plans.  On November 21, 1961, that the Iowa District East Board of Directors resolved to sponsor another mission in Cedar Falls.  One year later, Our Redeemer Lutheran Church was dedicated with the primary intention to serve the town while College Hill Lutheran would serve the campus. As a result, approximately 50% of College Hill Lutheran members transferred to the new church.

In 1961, Iowa State Teachers’ College officially changed its name to the State College of Iowa and to the University of Northern Iowa in 1967. According to a brief report prepared by Pastor Brammer to the District Mission Committee dated September 17, 1973, enrollment at the University of Northern Iowa was expected to rise to 8,400 students in that year, meaning the mission field for the church was also increasing.  Although enrollment was greater than before on campus as it became university, the 1970s brought lower student church attendance.  Also during the 1970s, evangelical groups such as Campus Crusade and the Fellowship of Christian Athletes increased in popularity, leading to a smaller attendance at College Hill, according to Pastor Brammer.

On January 27, 1980, College Hill’s founding pastor retired. Having served College Hill for 38 of his 42 years in the ministry, Pastor Brammer was to be missed. After Pastor Brammer retired, there was a vacancy for about two years. Then, on March 26, 1982, Pastor Randy McHone was called and installed, and served for about 4 years. 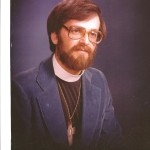 Another period of vacancy followed until February 1987 when the call was extended for the second time to Pastor Steven M. Eggers of Knoxville, Iowa. Pastor Eggers accepted and was installed on May 3, 1987. 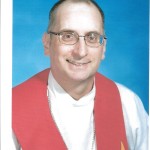 Since the Gamma Delta organization was dissolved in 1969, the Synod began a new group called Lutheran Student Fellowship (LSF). Pastor Eggers served as the first coordinator of Region 7 that encompassed Iowa, Minnesota, Northern Illinois, and Wisconsin. Not only did Pastor Eggers become active, but so did College Hill’s student population, with Roland Schmidt serving on the first LSF National Council.

In the 1990s, equipping the saints for service took on special meaning at College Hill. Called a “servant event,” eight students and Pastor Eggers went to Corpus Christi, Texas to assist a Hispanic mission. The group stayed in homes and spent their days repairing termite-infested lumber, landscaping, rebuilding fences — whatever the mission congregation needed. Somehow the students managed to sneak in trips to the ocean and a trip to Mexico. College students spending spring break sharing the fruits of the Gospel with others was so unique that Corpus Christi television stations covered the event. Every spring break since then, the college students have gone on a servant event trip.

Pastor Eggers’ time at College Hill ended in 1995 when he took another call. College Hill was vacant for about a year until Pastor Tom Ogilvie was installed as College Hill’s fourth pastor in January of 1997.

During Pastor Tom Ogilvie’s time at College Hill, the student church attendance was around 45 students per Sunday. LSF went on a yearly fall servant event trip and continued to go on a spring break trip.

In 1998, College Hill and Iowa District East purchased the two lots next to the church. One of the houses was torn down and the other house now was used as the Student Center for College Hill. The house was also used to house some of the student peer leaders of College Hill.

In 2004 a new Brammer Student Center expansion to the church building was completed. In the Fall of 2006, Pastor Ogilvie took a call to serve as pastor in Des Moines, IA at Shepherd of the Valley.

On July 1, 2007, Pastor John Wegener was installed as pastor at CHLC and continues to serve the congregation and students today.  The students of College Hill, which continue to number around thirty to forty. The students of College Hill are members of LCMS U, a campus ministry organization created in 2013 with the intention of creating more cross-campus unity and shared resources.  The students continue to reflect a Confessional nature in their worship, study of the Word, and service events, focusing always on Christ and the works flowing from the Cross.

College Hill students continue to participate in various service events, including the spring break trip, as well as host a well-known Lutheran theologian presentation in the Fall and attend various area presentations from Lutheran churches and organizations.  In January of 2013, students attended a campus ministry national conference in St. Louis: the first in over thirty years in the LCMS. At the conference, called Unwrapped, students learned Christian apologetics from among an impressive list of pastors and theologians across the nation.